I’m off to visit West Wycombe Park in Buckinghamshire. Why? Because that’s where they filmed the opening sequence of Labyrinth. Fellow Labyrinth fans will know that’s the scene where Sarah (Jennifer Connelly) runs across a little flint bridge beside a lake, and starts reading lines from her book, The Labyrinth – watched by an owl/Goblin King (David Bowie).

I first spotted the lake in the background of a scene in another movie (The Importance of Being Earnest) which had the location listed in the end credits. The house appears in a lot of period drama, from Downton Abbey to Pride and Prejudice and Zombies. I’ve been meaning to visit for ages, but the house is only open June to August – and then only Thursday to Sunday – but only between 2 – 6 in the afternoon.

And as I rely on public transport – let’s see, bus-train-tube-tube-tube-train-bus-bus. It’s not quite “Through dangers untold, and hardships unnumbered” – but I think it’s going to take a few hours.

For once I make all my connections, and arrive at the park before the gates are even open. I ask the National Trust lady at the entrance if she knows where the little flint bridge is. She doesn’t even know that Labyrinth was filmed here – and the house is set in 42 acres of grounds, with several bridges. Luckily it’s perfect weather for wandering

I turn left down Broad Walk, past Britannia Pillar, then turn right when I reach the lake and carry on until I come to a stream. I see an owl’s feather on the grass – a sign I’m heading the right way?

Thirty years later, some things have changed. Ivy and bindweed are taking over one end of the bridge, and as it’s high summer there’s a lot of pondweed growing in the stream – but it’s unmistakably the same place. I resist the urge to run across it, spouting lines from the film – but I do take a lot of photos. 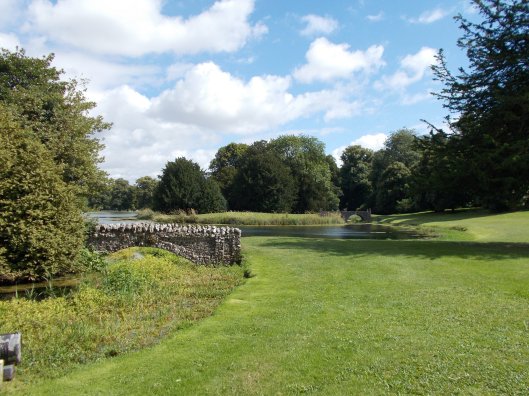 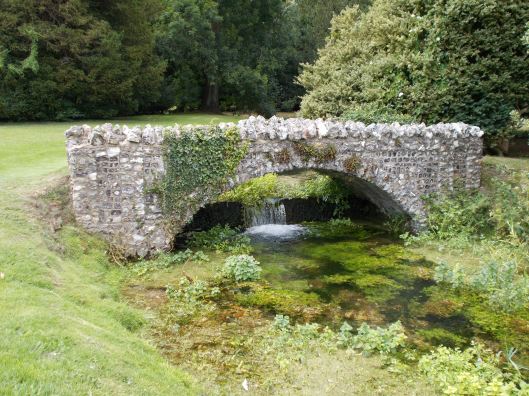 There’s no obelisk for an owl to perch on, no bench for Sarah’s dog (they were just set dressing). The clock tower isn’t there either – that must have been shot in America, as was the sequence immediately after the scene by the bridge. But there is a family of swans on the lake. I wonder if they’re descendants of the swans you can spot in Labyrinth, and I start to imagine an elderly swan grandfather boasting to bored baby cygnets about the time he once starred in a film with Jennifer Connelly.

The lake itself is said by some to have been designed like a swan – lake as body, river as neck, two streams for legs. Was it deliberately included in the film as a reference to the ballet Swan Lake, which also features a villain (Rothbart) who’s an owl – with ballet dancer’s tights? Probably just coincidence. When you’ve watched a film as often as I’ve watched Labyrinth, it does get inside your head.

And that’s why I’m here. To mark the film’s thirtieth anniversary, I’ve written a sequence of sonnets (fifty-five of them!) telling the story of Labyrinth in verse. I sit down on the grass under a tree and, like Sarah, begin to read aloud from my little leather book…

It takes me an hour. This has been a poignant year for Labyrinth fans, but reading these poems, in this location – I feel quite ridiculously happy.

By now the park is starting to get busy. I’m glad I arrived early enough to read my poems aloud without a baffled audience.  More people are here now, and another girl is posing for a photo on the bridge – and a guy is taking pictures of his special edition Labyrinth DVD!

If I miss my bus there won’t be another one for two hours, and although West Wycombe village is pretty, I don’t want to be stuck there on a Sunday afternoon – between the pubs and the traditional sweet shop, I would eat far too much (I can recommend the crème brûlée fudge). But I don’t want to leave…

And then a bird swoops across the lake. It’s not an owl (that would be too perfect) but a red kite – one of Britain’s most beautiful birds of prey. It makes a couple of lazy turns over the lake, then soars off above the trees.

Today’s not going to get any better than this. Time to head home.

As it’s Jim Henson’s birthday today, I thought I’d post a picture of this sweet painting of him with Kermit that I saw at last year’s No Strings Attached exhibition at the Dart Gallery, Dartmouth, Nova Scotia.

(And if you like art inspired by film and television, their Dart Trek exhibition, celebrating 50 years of Star Trek, opens next week.)

I’m sure Jim would be delighted to know how popular his work is today – including Labyrinth.

“What we were trying to do with this film… is to make a film that would make a difference to you, if you saw it.” (Jim Henson)

I love the way that Labyrinth has been inspiring people for thirty years.