“Play with your toys and your costumes”

After struggling with costume change yesterday, this morning I decide to just wear the thing and brave the walk to the convention. (Note to self – next time, get a hotel nearer the venue). It does feel a bit odd being out in public dressed like this – but it’s worth it when a little girl walking past with her mother looks at my costume and says “Wow!”

Today’s highlights include a Q&A with Boba Fett himself Jeremy Bulloch (very funny), fantasy author Charles de Lint reading from his as-yet-unpublished next novel, and a bubble workshop with the Jugglin’ Bubblers, featuring the biggest bubbles I’ve ever seen!

I also pay another visit to the vendors hall. Yesterday I managed to resist everything (apart from Arcane Angel), but today I have a proper look at the other stalls. There are a lot of lovely things on offer, from chocolate daleks to steampunk hats. Labyrinth seems to be a popular source of inspiration for Halifax artists, including:

The Quarrelsome Yeti  (alongside many weird and wonderful things with tentacles) has this cute print of Sir Didymus on his trusty steed.

An Oddity or Two  covers quite a variety of fandoms – for Labyrinth lovers, there are earrings (including Ambrosius and Didymus, Jareth and owl, and the door knockers), 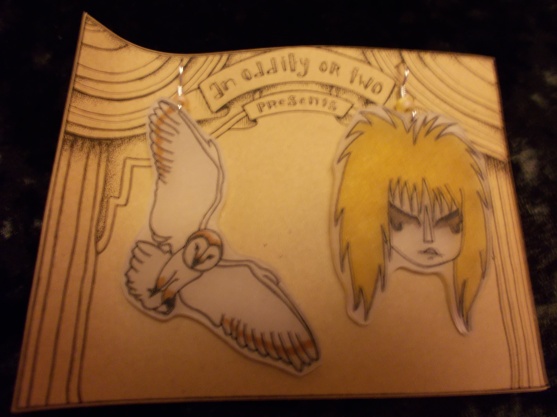 a badge of everyone’s favourite worm,

and this Jareth magnet (currently adorning my fridge).

It’s scented with cedarwood, fir balsam and lavender – not what usually comes to mind when I think of Jareth, but I guess really I should be relieved no-one’s tried to make a soap that smells like crystals and crotch…

This year Gates McFadden is a guest. Although she’s best known for playing Dr Beverley Crusher, in Star Trek – The Next Generation, anyone who’s reading this blog will also be aware that she was responsible for choreography on Labyrinth.

In honour of this, I’ve made a costume based on one of the dancers from the ballroom sequence in Labyrinth. This just about squeezes into my hand luggage. I’m very glad I’m not asked to open it at the airport, as leather masks can be difficult to explain to security personnel…

I’m not sure I’m up to braving the streets of Halifax dressed as a goblin ballroom dancer, so I decide to change into my costume at the convention. This turns out to be surprisingly difficult in a small cubicle…

But eventually I stagger out into the vendors hall – which has grown so much in the last few years that it’s now in another building, adjacent to the convention centre. I try to resist the bewildering variety of stalls and head for my first stop – Arcane Angel. I have been lusting after one of their limited edition Labyrinth cuff bracelets, and Marina had told me she would have four at the con. All her pieces are handmade, which makes them slightly different, but equally beautiful, so it takes me ages to choose. Finally I decide on this one:

I also end up with an owl necklace to go with it: 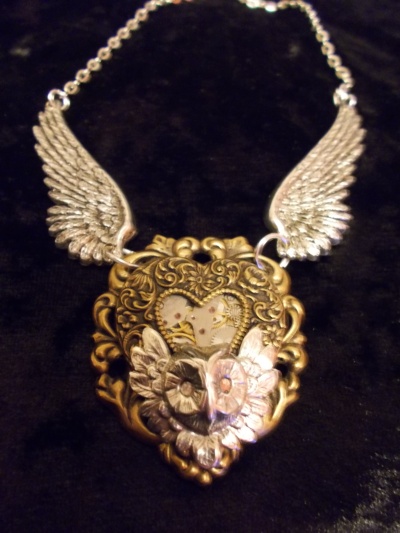 Then into the queue to get Gates McFadden’s autograph. Most of the photos there to be signed are from Star Trek, but I (of course) choose the Labyrinth one. Gates seems pleased, as apparently most people choose Star Trek. I then offer her a copy of my Labyrinth book. She is thrilled by this, and asks me to sign it for her – which is bizarre. So she signs a photo for me:

While I sign my book for her. Never did I imagine anyone involved with Labyrinth would be asking me for my autograph LOL

My book is back from the printer – and William the Worm approves! 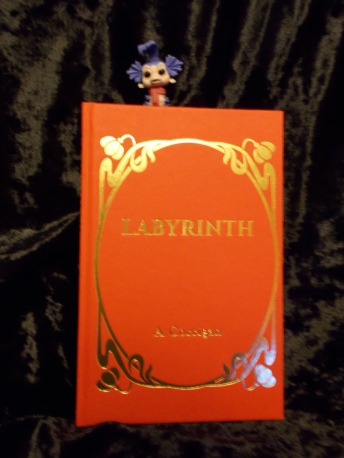 Labyrinth – One classic film, fifty-five sonnets retells the story of the cult film in verse. It’s been a labour of love and I’m thrilled to see it in print – and looking so pretty. 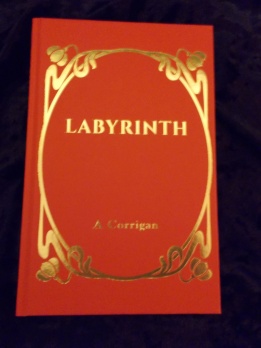 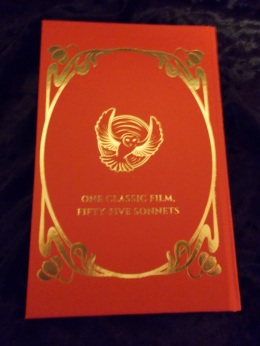 The hardback of my book Labyrinth: One classic film, fifty-five sonnets will be available from November – soon I’ll be surrounded by books!

The e-book is available now.

If you subscribe to NetGalley, it’s available there until 27 October – thank you Chantale for my first review!

As it’s Poetry Day, here’s an extract from my book – Labyrinth: one classic film, fifty-five sonnets:

The goblins heard. The goblins came. Strange calm
descended swiftly on the baby’s room
and Sarah, fearful of some eerie harm,
searched for her half-brother, in the half-gloom.
Beneath his blanket, someone – something? – stirred.
She drew it back – but there was nothing there.
Then low unsettling noises could be heard,
behind, around her – goblins, everywhere!
A shadow, a reflection somehow strange,
a glimpse of tail, of helmet or of horn.
A white owl, flapping at the window panes,
attempted entry through the long French doors.
One more lightning flash, a blast of thunder –
she turned, to see the windows flung asunder.

The owl became a man; his majesty
such that the very air did seem to sing.
And Sarah wondered if she should curtsey,
for surely this was Jareth – Goblin King.
His windswept hair, a mane of tawny blond.
His eyes most magical; one dark, one light.
His face a mask of mischief, cruel, yet fond.
His garments, darkness; blue, his cloak of night.
Black were his boots, his gloves, his collar high,
and breastplate leather, with accents of bone –
upon his chest, a pendant triangle
with curving arms, wrought of silver, of gold.
Though Sarah tried her rash words to retract,
“What’s said, is said” he uttered – stating fact.

I love the way that Labyrinth has been inspiring people for thirty years. 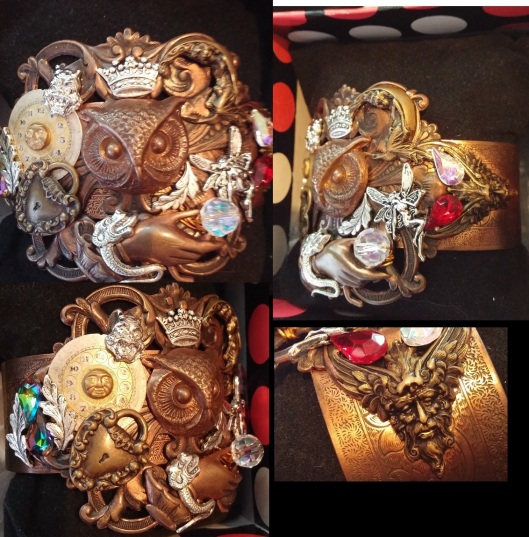